As I continually tell anyone who will still listen to me ramble on about my study abroad experience, one of my favorite parts of country-hopping around Europe was the chance to try some of the regional cuisine. I’ll focus on French food in its own post, because I had so much more time to explore different dishes, so this post will show the delicious meals that stuck with in during my travels to Spain, England, Germany, Austria, Italy, Czech Republic, and Hungary. Bon appetit!

England is known for a lot of things: rainy weather, the Royal Family, accents, rainy weather…but food is not generally one of them. However, an English specialty is (fried) fish and chips (French fries for the Americans), and as I’m never one to pass up trying local cuisine, my friend Katie and I headed to Garfunkel’s Restaurant in Trafalgar Square. It had the appeal of a diner and the fish and chips dish that we shared really made me appreciate that English classic!

Fish and chips at Garfunkels!

Now, Spain is known for its food- and drink- and Barcelona in particular! I was lucky enough to visit Barcelona twice when I studied abroad- once with friends from my program and once when my family visited over Christmas. One of our favorite meals in Spain was the traditional paella- informally Spain’s national dish. Based in rice, paella can take many varieties but being in Barcelona seafood paella with fish and mussels is very common. Often made to share, paella is served in a huge round dish as a main course.

Another Spanish specialty are tapas: delicious and often elaborate appetizers that groups share communally as a meal to prolong conversation. While in Barcelona with my friends, we stumbled upon an excellent tapas lunch restaurant with exquisite options: thick bread covered in cheese and chorizo with out of this world spices. Tapas can cover a lot of options, from mini sandwiches to kebabs to raw vegetables, and its best to get several to share and sample! 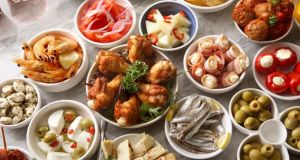 Sangria and chorizo are two of my favorite Spanish classics- each satisfying a different taste! I had never tasted sangria until I studied abroad, where there was a popular Spanish bar in downtown Montpellier that was flooded with international students taking advantage of their 5 euro liter sangria. HOWEVER, the sangria we tried in Barcelona was top notch. As I tend to like my alcoholic beverages sweet, sangria hit the spot. Made up of wine, fruit juice, and brandy, sangria can come in many different flavors depending on what fruit is mixed in. My favorites in Barcelona were mango and peach flavored, and there are so many options! 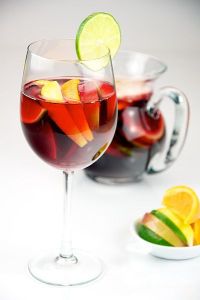 Chorizo has become a hit outside of its native Spain, spreading to supermarkets around the world. A spicy pork sausage, chorizo is perfect on sandwiches, in salads, and skewered as kebabs.

The entire time I was in Munich, my amazing travel buddy Brooke was forced to put up with me suggesting we have schnitzel for every meal. While that sounds appealing to my taste buds, my health would probably suffer. Anyway, I got my first taste of schnitzel our first night in Munich at the Christmas market we ventured out to first thing. Schnitzel is basically tenderized meat (I was partial to chicken but could be pork, veal, beef, turkey, or or mutton), covered in bread crumbs and egg yolk and fried. (See what I mean about my health?!) It was to DIE for, and I don’t say that easily! A bratwurst, of course, is a German pork sausage that my dad introduced me to as a child, but was 100 % better in its origin of Germany. I couldn’t get enough!

eat ALL of the brats!

Now, I don’t know about you but when I decided to go to Austria as a day trip from Germany, I didn’t give much thought to the food other than that it would be similar to Germany. And it was- schnitzel and bratwurst to go around! However, Brooke and I hit up the Salzburg Christmas Market and as we were deciding (arguing in a good-natured way) about what to snack on, we had to come to a compromise. We were broke, so we wanted to share a snack, but I had my heart set on some Austrian chocolates and Brooke was dying for a thick warm pretzel, so we melded them together to enjoy an absolutely enormous chocolate-covered pretzel! (hand-dipped, of course!)

When I planned my trip to Venice and Rome, the ONLY food items that were on my list were pasta, pizza, and gelato. I know, stereotypical, but so little time so many food cliches to eat! First I managed to have some authentic Italian gelato in Venice. On our morning excursion to the island of Murano, my traveling companions for the weekend- Michael and Ben- and I stopped into a gelato parlor- the fabulous Gelateria al Ponte- for a scoop or two. I had my favorite flavor, coffee, and instantly made a vow to never eat any gelato that wasn’t Italian ever again. (Just kidding- I like gelato even if it isn’t authentic!)

Ben and I enjoying our gelato!

Our classic Italian meal that night consisted of two pizzas split between the 3 of us in a small place we stumbled upon after racing around Venice trying to find an affordable place to eat pasta. Eventually we caved and decided to eat pizza…which was the best decision we had made the entire day. There’s really no way to describe what made that pizza in Venice exponentially better than any pizza I had had anywhere- in the States and other places- other than the flavors melted in your mouth and you couldn’t believe this was pizza and not a gourmet meal.

As for pasta, we came across a restaurant right next to the Pantheon- we got very lucky to find such an affordable and delicious pasta restaurant so close to a major tourist attraction. We chose the Trattoria da Ugo e Maria due to its menu that allowed us students to spend less than 10 euros each for a pasta dish and some Italian red wine. I had tortellini, one of my favorites! Would definitely recommend.

One of my absolute favorite foods to try was goulash- it may or may not have been the primary force behind our trip to Prague. Goulash is a traditional Central European dinner dish that consists of vegetables and meat in a stew together with spices such as paprika, often served with potato dumplings. Alex and I were dead set on having goulash for dinner our first night in Prague, and did not disappoint. I ended up having goulash two more times in Prague and once in Budapest, just because it was so delicious!

I had never heard of trdelnik before getting to Prague, but once we started visiting the sights small bakery stands were everywhere in the city! A classic Czech pastry, trdelniks are rolled dough on a stick, grilled and buttered and topped in a wide variety of flavorings. I picked chocolate for my trdelnik, with Alex enjoying her cinnamon flavored pastry, and they were the perfect, inexpensive treat to beat that midafternoon slump.

The one spice that I hadn’t had much experience with prior to my study abroad year and yet came to love was paprika- we fell in love in Budapest. Everything we ate during our time in Budapest was flavored in some way by paprika- be it pasta, chicken, sandwiches, or eggs. Made from air dried chili peppers, paprika was my favorite study abroad seasoning, so much so that we went back to the same restaurant across from our hostel three times just to enjoy the chicken paprika!

Let me know your thoughts in the comments!

There was an error retrieving images from Instagram. An attempt will be remade in a few minutes.